10 Things to Smile About in November 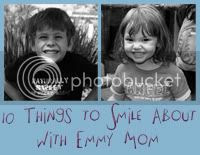 I can't believe the end of another month is here already! Where have the days gone? What have we been smiling about here in the madhouse this month then....

Today has to be the BEST news I've had in ages. My Mum has had her last session of Chemo!! She was told today that she wont need to have any more. She will still have regular checks but at the moment her test have come back all clear for the last 2 months. Bloody wonderful news! I am so relieved I can't tell you. Especially as last week she cancelled her Chemo as she was so poorly she couldn't make it. Such a huge relief and just in time for Christmas too.
We are making progress with Chaos and his behaviour. We no longer feel like launching him out of the window every day, just occasionally! (I'm kidding - ish) He is really coming on and it is making a real difference to everyone in the house.

Big has decided he wants to be an engineer for NASA!! He has never had any real ambition and finds academic subjects a real struggle so this revelation was quite a shocker. He has shown his dedication to this decision by talking to some of his teachers to see how he can best improve his grades. He is in year 8 so it is an important year for him to make this choice. I am so proud of him for taking the initiative. I am going to arrange to see his teachers and see what help we can give him at home. I also want him tested for dyslexia as he has trouble processing information. He told me tonight that when he reads the words jump about in the pages. Hopefully they should get him the help he needs.

My little Squishy baby is on the move. This week he has taken a few steps unaided and is getting the hang of standing up on his own too. He has been so ill with a chest infection the last week, he hasn't been his normal cherry self. He is getting back to normal now and getting into mischief! He has also started to copy what we are saying. He only does it occasionally so we thought it was coincidence at first. He will be chatting non stop before we know it, I'm sure!
Big scored a level 5 in his cooking class for attempting a dish on his own and making it well without individual supervision or help. The highest score you get in year 11 is a level 7 and he is only in year 8! That was a great achievement but he is also a great cook!!

My husband is waiting for a reply from an agent about his script writing. He has been writing since I've known him and is gradually gaining recognition for his work. Fingers crossed this agent will realise his potential and choose to represent him. He will be the happiest little bean then!!

Just because this picture is way too cute not to share it again. It is probably the only time I'll get them in anything matching too. They are delicious, aren't they?!

For the million times that these loons have made me laugh at something they have said or done. I love 'em all!

I haven't used my camera in ages. The weather has been pants and I haven't felt the creative urge to take anything lately. Well, until the other day. I slide open the door to the garden and took a few shots of the rain drops. I was particularly pleased with this one. (Crown paint eat your heart out!) 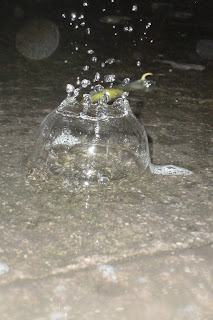 There is nothing that gives me greater pleasure than watching my babies playing together. Here are some cute moments from this month.


So there are few highlights from my month. Share yours by linking them up with Emmy Mom or pop over and read some more top ten smiles from this month.
Posted by Kat Sighs at 00:23
Email ThisBlogThis!Share to TwitterShare to FacebookShare to Pinterest