Another week of entertaining the little people loomed large. I won't lie, I am finding it a bit of a struggle at the moment. Chaos is going through one of his hyperactive/bullying/needing constant attention phases at the moment. Squish has decided that the safest place to be is watching the tv (as it's too calm an activity for Chaos) which isn't ideal but I honestly can't blame him.
I thought I'd get the house work out of the way and take the boys out somewhere new for a change. Chaos had hit Squish with a couple of trains and head butted him in the nose which didn't bode well for a happy Monday. By 9:30am we were ready to go. I had a rough idea of where to go and it wasn't too far.

We parked the car and jumped out. The boys were quite excited to be out and able to run about unrestricted. We crossed the road and headed up the gravel path. There was a woodland path off to the left so I thought I'd give the boys the choice of which way we went. Chaos chose to go through the wood so off we went.

I kid you not, in the few seconds I was off the path guiding Squish away from the odd looking mushrooms, Chaos had found a two foot by five foot area of thick black mud and got stuck in the middle of it. As I got closer, I could hear him squealing a bit. He was obviously a bit worried about being stuck in the mud. Just as I got to him, he realised he could save himself by taking his feet out of his wellies. He bounded out of the mud looking very pleased with himself. I couldn't muster the same enthusiasm. He was covered in thick, black mud. Having an aversion to any wet or dirty clothing, that was effectively the end of our walk. It took us longer to drive there than the amount of time we spent walking! We went back to the car and drove home. We were back at 10:15....  Within a few minutes my Dad arrived to help me with the garden so all was not lost.

This photo was taken on the 29th of May.

I am lucky enough to have people to come and help me dig this patch over and take the rubbish to the dump. My Dad being the Main Man. Today was no exception. He worked all day, digging and clearing. He also cut down some of the branches from a neighbours garden that were over hanging our garden (we had permission).
Below you can see what the garden looks like this evening. Huge difference! I am so please that it is nearly all cleared now. There is just the little mound in the middle where the bin is to go and it's all done. In two weeks my friend is dropping off her yurt (after Glastonbury Festival) so it can dry out before she moves. We are picking up our own yurt mid July. I am very excited about this as it means I can have Reiki evenings out there instead of having a mad panic to clear the house up every other Tuesday. 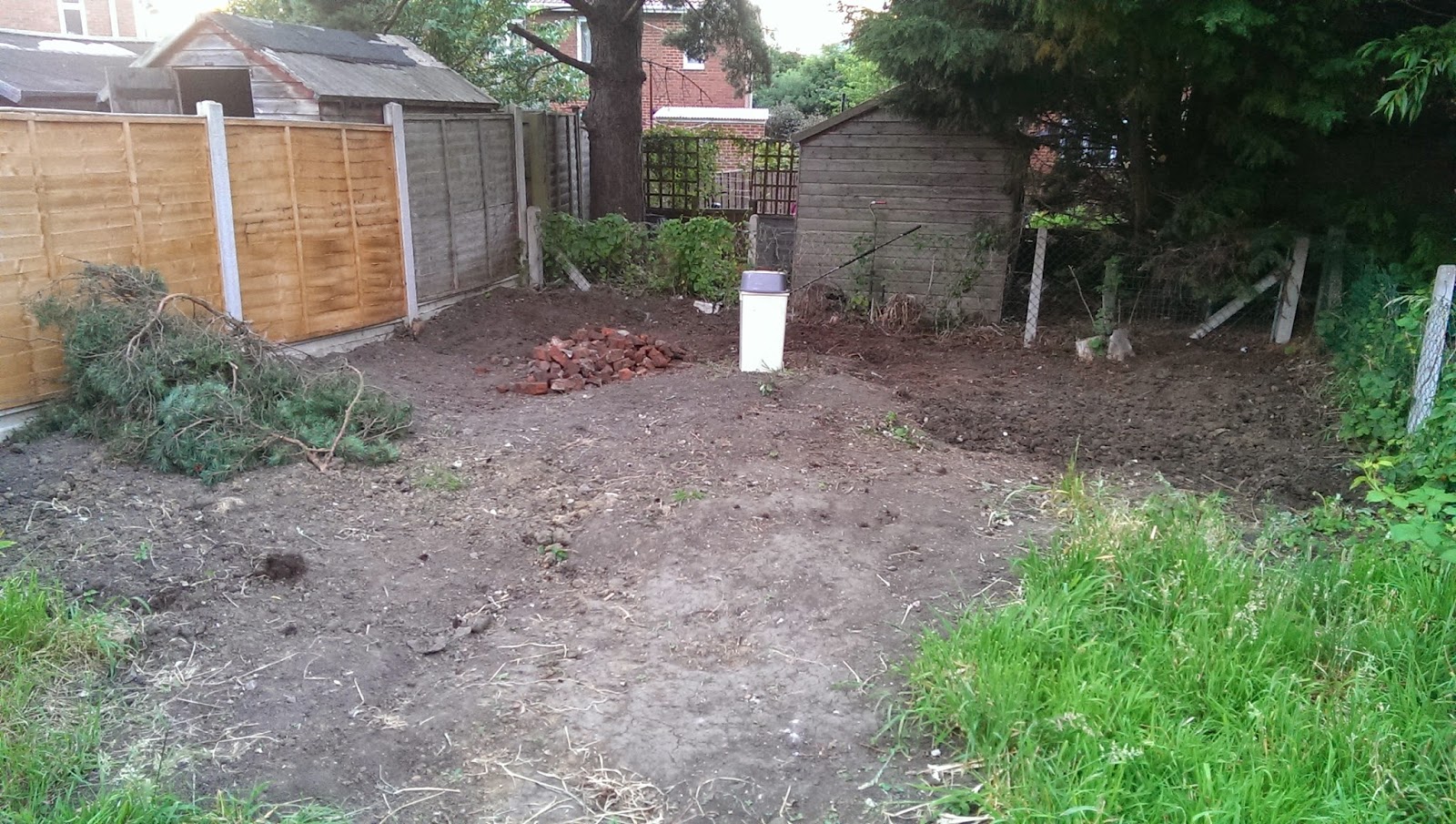 Once the boys had gone to bed for their afternoon nap, I gave the bathroom another coat of "Ugh Green". It still isn't a beautiful colour but it does look better having had a second coat. I am tempted to leave the window alcove orange. I think it looks quite cool like that! 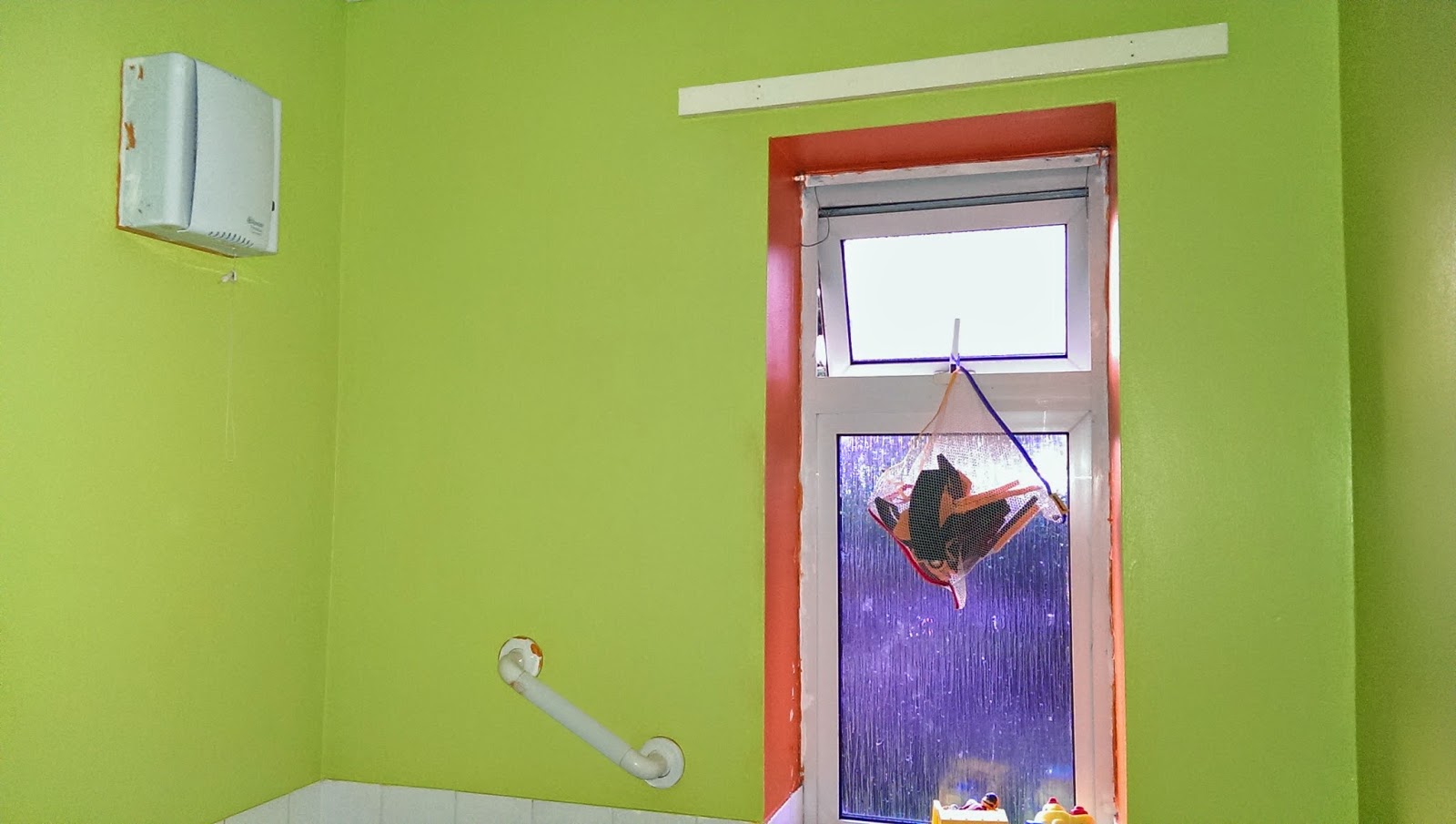 Once I have painted it completely, I shall cut out some different templates and paint coloured hearts, stars and spots on the wall. The idea is to lessen the intensity of the green.... hopefully! I shall keep you posted on our slow but steady progress.

Hope you have all had a happy Monday or at least a productive one!


Posted by Kat Sighs at 23:39
Email ThisBlogThis!Share to TwitterShare to FacebookShare to Pinterest