Hello my little blogety blog, I've missed you! I've missed telling you all about my day and how I feel about the latest drama. I've missed you're pretty autumnal coloured leaves and you're little counters that tell me how fast my babies are growing. I've been on holiday, you know. I wrote a list of all the things I wanted to tell you when I got back so I wouldn't forget. I have some brilliant photos to show you too. I wish I could have taken you with me but we can't go everywhere together now can we?!

Let me tell you about our week away....

On Monday, we packed up the car, in a slightly random fashion, and headed off for a week on the Isle of Sheppey. It took us about 3 hours to get there and I think I dozed most of the way there which was great but rather uncomfortable. We arrived at tea time with two rather hungry and slightly bewildered boys. Squish has never been on holiday before, never mind in a caravan. We put the tv on to amuse them while we unpacked. Chaos knew what was going on and set about checking all cupboards and drawers within reach for anything breakable. Squish, meanwhile, was mesmerized by the tv being at his height and was poking at it and pulling it off the shelf. A great start, I'm sure you'll agree!

I had to make a dash up to the office to see if they had any socket covers as a lot of the sockets were skirting board height or head height for Chaos. They didn't have any so I made do with some sellotape (great tip if you're ever away without socket covers!) While my husband made himself busy preparing tea I moved the beds around. We had a double bed and two singles. By some stroke of luck the single mattresses fit down either side of the double bed. I folded the duvets in half and voila - two beds for little people. After a quick but awkward hose off in the shower, we got the boys ready for bed. It took a while for them to stop trying to creep off into the other room and settle down. In fact, it took that long we all ended up falling asleep!

Tuesday we just had a wander round the site and played in the little park they had. Squish loved the swing and Chaos saw a tractor pull up so we went to investigate. He looked so tiny next to it! Chaos was a bit of a pain that day so we decided to go out for the day to see if that helped.

Wednesday, we made a packed lunch and set off for Wildwood Wildlife Park.

We had a great day! Chaos was out of the buggy the whole time we were there (5 hours) and loved the freedom. Squish was brilliant and didn't complain once about being in the buggy. After we had some lunch we played in the park for a while before looking at the rest of the animals. By this point Chaos was a bit tired and ASKED to get in the buggy for the first time ever!! 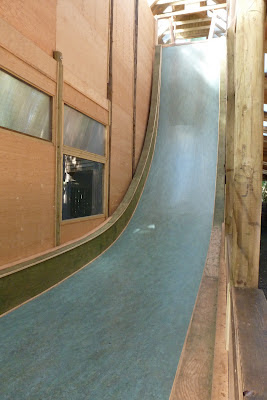 In the play area they had the longest drop slide in Kent. I was talking to the supervisor about it and he said there was no minimum age so Chaos could go on it if he wanted to but he would have to go on his own. He said the youngest child they have had on it was 18 months old. You may wonder why I am telling you this. Here is a photo taken from the bottom of the "Drop". Would you want to drop your baby from the top of here??

Thursday the boys were still quitetired so Squish went back to bed after breakfast and slept all morning! Chaos stayed up and played with some toys and watched tv whilst eating all the time. It was good that he ate so much as he doesn't usually eat much at all.
Once we had all had some lunch, we set off for Farming World. As the trip the day before had been such a success we felt another trip out was on the cards.
It was a really nice place designed with children in mind. The animals were housed so they could be seen by young children without the usual lifting required. There were several play areas so the children could let off steam. Again, we let Chaos have free reign and he loved it! He loved the big Shire horses and the little Kune Kune pigs. He learnt to say Alpaca and Peacock too.
There was a hawk center there too so while we were waiting for the flying display to start Chaos saw a big tractor and became entranced. We couldn't get him away from it. Luckily the Bird handlers were very patient and said he was fine to look round it, so he did. He inspected every part and had a good look round the trailer too! He does love his tractors. Just as much as I love birds. Luckily for me we were allowed to fly the birds they brought out. This was my highlight of the day.

First is Wally an Australian Burrowing Owl. He is tiny and weighs 6oz! I love him, especially the way he runs through the tunnel they put down for him.
Next is Chip, a Harris Hawk. I have flown one of these before and they are beautiful birds. Not worth messing with though!

Squish had his little fingers nibbled a bit by Wally but he is so small it didn't hurt. I think Squish liked the birds. Wally was a bit quick for him and was gone before Squish could really look at him. Chip was better once he had landed as he didn't move so quickly. They also let us see a 2 week old Harris Hawk. 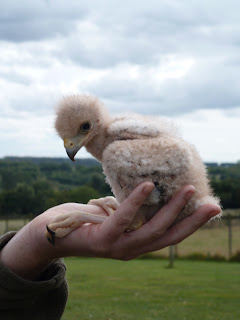 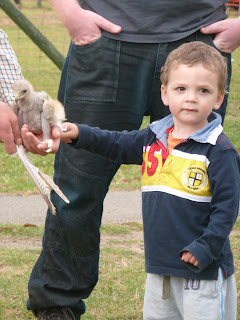 Chaos wasn't really interested in the birds but he had a little stroke of the baby, albeit with a feather he was given! We went on a tractor ride around the farm afterwards so he was very happy. It was just like his toy "Trac and Traiyer" (tractor and trailer, for those not yet fluent in toddler!). 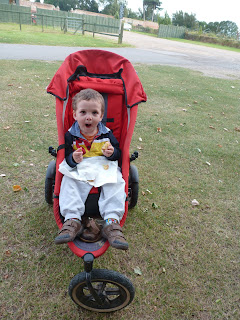 A great afternoon was rounded of perfectly by, yes you guessed it... Tea and CAKE!

As we had to be out of our caravan by 10am we did most of the packing last night and headed off after tidying up this morning. We had a great week away but I don't think there is much to do on the Island itself. I shall think of our great week as I wade through all the dirty washing tomorrow...

Posted by Kat Sighs at 00:17
Email ThisBlogThis!Share to TwitterShare to FacebookShare to Pinterest